Queens District Attorney Melinda Katz today announced the filing of a joint motion to vacate the murder conviction of Samuel Brownridge, who was incarcerated for more than 25 years for a crime that he did not commit. Mr. Brownridge was convicted based on 2 eyewitness identifications. The motion filed today details new evidence that both undermines the reliability of those eyewitness identifications and implicates a violent felon, Garfield Brown, as the actual shooter in the 1994 execution-style murder of a 32-year-old man in St. Albans, Queens.

District Attorney Katz said, “This is a profoundly poignant day for Mr. Brownridge. After decades of voicing his innocence – this man who served 25 years for a crime he did not commit – will finally be unencumbered by this miscarriage of justice. When I created my Conviction Integrity Unit, it was my goal to do our best to undo the wrongs when our justice system makes life-altering errors. This is our first case and we will continue to work diligently to investigate credible wrongful convictions.”

“We must always keep in mind, that when an innocent person is imprisoned for a crime he or she did not commit, the real perpetrator evades justice and is free to commit other atrocities,” the DA added. “In this case, Garfield Brown was never held accountable for this violent crime.”

Donna Aldea, Brownridge’s defense attorney, said “After years of hard work, investigation and unrelenting persistence in our fight for justice, today — after 25 years — the truth has finally prevailed. While Samuel Brownridge is deeply grateful for the unwavering dedication of his advocates and supporters during this long struggle, and for the courage and integrity of the District Attorney and her staff in recognizing and correcting this grievous injustice, there is nothing that will restore the 25 years of Sam’s life that were taken from him as a result of deep, fundamental flaws in our criminal justice system.

“In the spirit of cooperation between the defense and prosecution that led to this exoneration today, it is my hope that legislators, judges and attorneys on both sides of the bar will take the time to review and understand the multiple failures in our system that produced — and repeatedly affirmed — this unjust conviction, so that we can work together to create and achieve a criminal justice system that is truly just for everyone.”

Garfield Brown, who was featured on “America’s Most Wanted” TV show in connection with 2 other, unrelated homicides, was killed in a shootout with police when they were attempting to apprehend him in 2002.

Photographs from around the time of the 1994 homicide, shows the resemblance between Garfield Brown (left) and Mr. Brownridge (right): 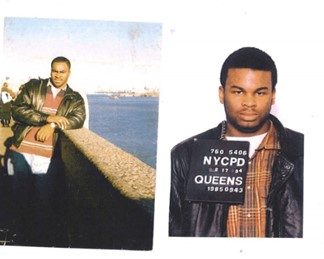 It is our hope that with the filing of this joint motion, the Court today will vacate Mr. Brownridge’s murder conviction and the indictment in the case will be dismissed – fully clearing him of all charges.

The victim in this 1994 homicide was Darryle Adams, who was shot and killed in his St. Albans neighborhood on the night of March 7, 1994. Mr. Adams was confronted by a group of 4 men, one of whom was in a wheelchair. The man in the wheelchair struck the victim in the head with a bottle and another member of the group then shot him in the head. There was no apparent motive for the crime.

Mr. Brownridge, represented by Donna Aldea of the law firm Barkett, Epstein, Kearon, Aldea, & Loturco, LLP, presented substantial new evidence of innocence to the Conviction Integrity Unit (CIU).  The CIU then conducted its own investigation and reached the conclusion that Mr. Brownridge is actually innocent. According to the motion filed today, the jury that convicted Mr. Brownridge did not hear the following evidence that would have changed the outcome of the trial:

There is also new evidence undermining the eyewitness identifications used to convict Mr. Brownridge. The New York City Police Department had initially developed 2 suspects – one as the shooter and the other as the man in the wheelchair – and placed them in photo arrays, but later found that they were not involved and voided the arrests. Despite the fact that these two initial suspects were undoubtedly innocent, both men were identified from photo arrays by one of the eyewitnesses who later identified Mr. Brownridge.[1]

There is also reason to doubt the reliability of the second eyewitness. This witness had obvious intellectual impairments during the trial, and gave varying and implausible accounts of what he saw on the night of the murder. Although he could not be located as part of the CIU investigation, this witness has since been diagnosed with schizophrenia and has recanted his identification of Mr. Brownridge in an affidavit provided by Mr. Brownridge’s attorney.

Taken together, this new evidence demonstrates by clear and convincing evidence that Mr. Brownridge did not murder Darryle Adams. Under the standard articulated by the Second Department Appellate Division’s People v. Hamilton, this evidence of innocence requires that Mr. Brownridge’s conviction be vacated and the indictment be dismissed.

Because Garfield Brown was shot and killed by police who were attempting to apprehend him in relation to other murders, no further prosecution is warranted.

CIU Director Bryce Benjet also explained the scope of the CIU’s work: “Justice requires us to do more than simply acknowledge a miscarriage of justice. As part of every CIU investigation, it is important to identify the root causes of the wrongful conviction and enact policies to prevent recurrence of these tragic failures of our criminal justice system. Eyewitness misidentification is a leading cause of wrongful conviction, and the prior misidentification of 2 men in photo arrays certainly raises questions as to the reliability of the identification procedures used in this case. However, recent statutory reforms would have addressed some of these problems. For example, a 2017 statute (NY Crim. Pro. § 60.25) was enacted to reduce the chance of suggestive identification procedures by requiring blind administration of photographic lineups. And the recent discovery reforms which took effect this year likewise ensure defendants are provided all information relating to identification procedures in a timely manner.”

The Conviction Integrity Unit’s Investigation was conducted by Senior Assistant District Attorney Alexis Celestin under the supervision and with the assistance of CIU Director Bryce Benjet. Mr. Brownridge’s case is the first completed investigation by the CIU. Over 40 cases have been submitted to the CIU since the unit was established by District Attorney Katz in January 2020.

Use Password: 1094. Please note that recording this hearing is strictly prohibited by law. The live stream will become available at 2:45 p.m. and the hearing will begin at 3 p.m.

[1] The two men were not identified in a subsequent live lineup.