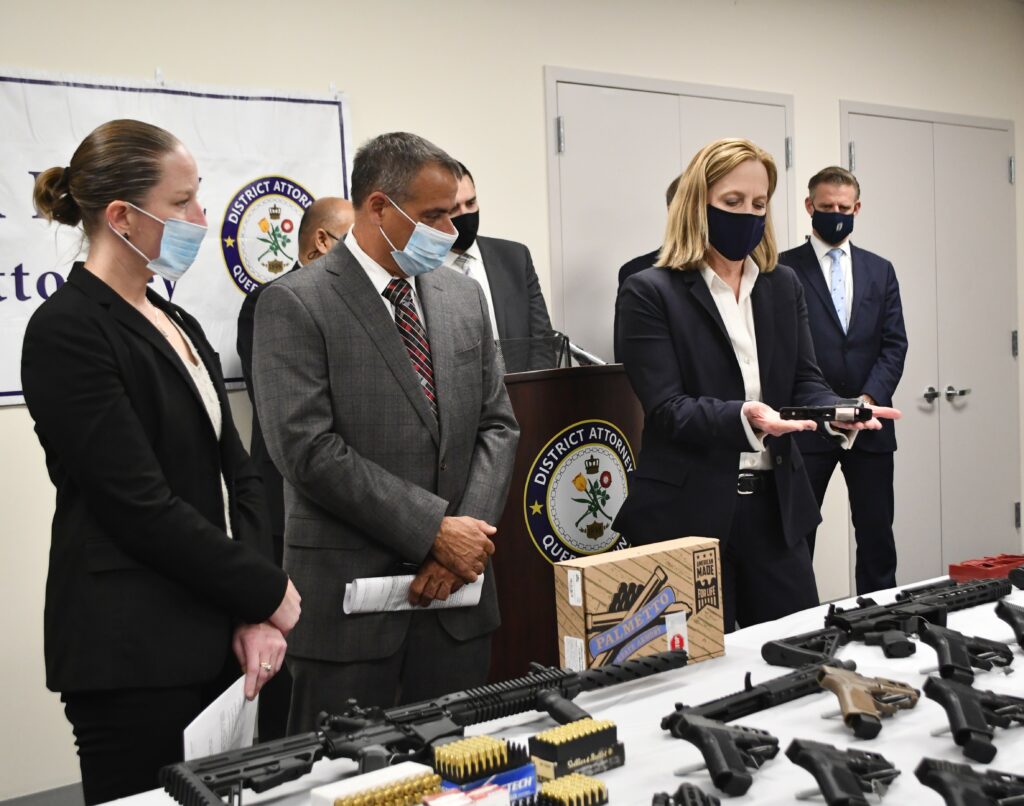 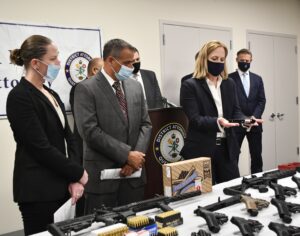 Queens District Attorney Melinda Katz, joined by NYPD Chief of Intelligence Thomas Galati, announced today that Chaz McMillan, 20, has been charged with multiple counts of criminal possession of a weapon, criminal sale of a firearm and numerous other charges for allegedly having a stockpile of illegal weapons – including “ghost” guns, large capacity magazines and ammunition – in his home.

District Attorney Katz said, “This is the fifth seizure of ghost guns in Queens since August – and we will not stop. Using traditional investigative techniques, accurate intelligence gathering and analysis, we are continuing a relentless pursuit of those who think they can get away with bringing gun parts into our borough, assembling them and selling them here. Working in partnership with the NYPD, we are going to dismantle the ‘polymer pipeline’ – ‘polymer,’ because a crucial component of these ghost guns is made of a durable polymer plastic – and get these tools of death off our streets.”

Police Commissioner Dermot Shea said, “When four people were shot outside a club in Upper Manhattan in September, the shooter used a ghost gun. When three people were shot outside a studio in midtown Manhattan in November, a ghost gun was involved. When we recently arrested a 17-year-old student at his Brooklyn high school, we recovered a ghost gun and $30,000 in his backpack. This not a passing fad. These illegal weapons endanger our citizens, our police and our kids. Snapping together semi-automatic pistols and assault weapons from kits that are ordered from out of state is not some kind of hobby. We are seeing hundreds of ghost guns, ordered online and shipped directly to New York City. This is emerging, quickly, as a replacement supply chain for gun smugglers who traditionally relied on the ‘iron pipeline.’ When we see dozens of guns in this case – and component gun parts to make more – we can only surmise there is an intent to sell and distribute them. I want to commend Queens District Attorney Melinda Katz and her team working hand in hand with our Intelligence Bureau Major Case team on ghost gun cases to prevent these guns from hitting our streets.”

McMillan, of 162 St. in Fresh Meadows, was arraigned Wednesday night before Queens Criminal Court Judge Karen Gopee. The defendant is charged in a 125-count criminal complaint with criminal possession of a weapon in the first, second and third degree; criminal sale of a firearm in the third degree; criminal possession of a firearm; manufacture of weapons and dangerous instruments; unlawful possession of pistol or revolver ammunition; and other charges. Judge Gopee ordered the defendant to return to Court on December 13, 2021. If convicted, McMillan faces up to 25 years in prison.

Investigators were conducting on-going surveillance of the defendant who has allegedly been buying firearm parts online. They executed a search warrant early in the morning of Wednesday, December 8th, wherein the following firearms and other items were recovered:

DA Katz said defendant McMillan does not have a license to possess or own firearms in New York City.

Since August, there have been a total of five ghost gun takedowns in Queens – two in Richmond Hill, one in Hollis, one in Rosedale and one in Fresh Meadows – with six defendants charged.

The investigation was conducted by Detectives Jason Robles and Breanna Knight of the DA’s Detective Bureau, with the assistance of Lieutenant Alan Schwartz, Sergeant Joseph Falgiano, under the supervision of Assistant Chief Daniel O’Brien. Also taking part in the investigation was Assistant District Attorney Shanon LaCorte, Director of the District Attorney’s Crime Strategies and Intelligence Unit.

QUEENS WOMAN CHARGED WITH KILLING MAN FOUND DEAD IN HER BED; VICTIM WAS SHOT ONCE IN THE HEAD IN SEPTEMBER 2021

A Year In Review: Reflecting On Our Progress