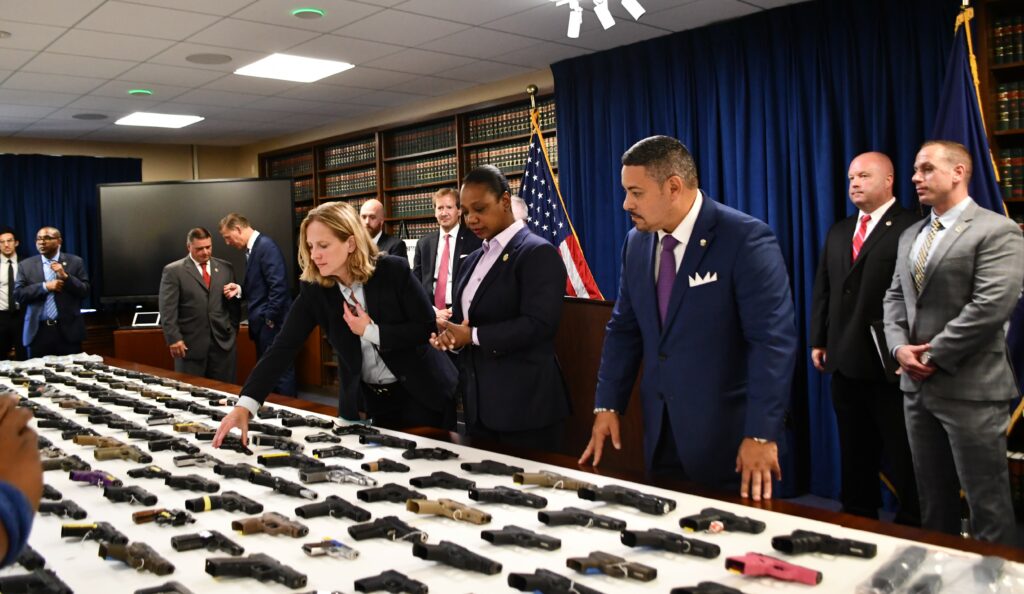 Queens District Attorney Melinda Katz, joined by New York City Police Commissioner Keechant L. Sewell, today announced a 1,611-count indictment and the arrests of five individuals allegedly involved in a gun trafficking ring using the notorious Iron Pipeline to smuggle guns purchased in Knoxville, Tennessee, which were then sold illegally in Queens County. Law enforcement officials removed more than 180 illegal weapons from our neighborhoods, along with 136 high-capacity magazines and hundreds of rounds of ammunition during the course of an 11-month-long investigation, titled Operation Hotcakes.

District Attorney Katz said, “Illegal gun traffickers who flood our neighborhoods with dangerous firearms put every resident of our borough at grave risk. We have seen far too many instances of guns, purchased down South and trafficked into New York, that are then recovered at devastating crime scenes, leaving bloodshed and tragedy on our streets. Cutting off the notorious Iron Pipeline supply chain of these deadly weapons is a top priority for my administration. I want to thank the NYPD’s Firearms Investigation Unit for working closely with my Office’s Violent Criminal Enterprises Bureau in bringing these defendants to justice. We will continue our efforts against the proliferation of gun violence in this borough.”

Police Commissioner Sewell said, “Building long-term investigations to stop accused gun traffickers from funneling illegal firearms up the Iron Pipeline is one layer of the NYPD’s relentless work to eradicate gun violence in New York City. I commend our NYPD detectives and prosecutors in Queens for their sustained focus in this case to interdict guns before they hit our streets. This is the work we all must continue – and we will – because the lives of New Yorkers we serve depend on it.”

The District Attorney identified the defendants as Anthony “Tony” Sanford, 57, of Jamaica, Queens; Oliver Sanford, 40, of Springfield Gardens, Queens; Jonathan Harris, 28, of Starling Avenue, the Bronx; Thomas Parsley, 44, of Mickle Avenue, the Bronx; and Richard “Rick” Horne, 70, of Blountville, TN. The defendants were variously indicted by a Queens County grand jury on July 19, 2022 on charges of criminal sale of a firearm, criminal possession of a weapon and conspiracy. (See Addendum #1 of PDF for further details on defendants).

The indictments allege that the ring operated with Jonathan Harris as the main dealer, Richard Horne as the main supplier and Anthony Sanford, his nephew Oliver Sanford, and Thomas Parsley acting as the principal re-sellers and distributors of the weapons sold across Queens and Bronx Counties.

DA Katz said the investigation began in two separate parts: Following prior intelligence gathered during the summer of 2021, defendant Anthony Sanford sold five handguns as well as .357 and .40 caliber ammunition to an undercover police officer in August and October 2021 in Queens. Sanford’s nephew, Oliver, was observed conducting counter surveillance during both transactions.

According to the charges, a total of 22 buys were allegedly completed between the undercover officer and defendant Anthony Sanford between August 2021 and April 2022 in and around Jamaica and Springfield Gardens, yielding 145 firearms and 99 high-capacity ammunition feeding devices.

An unrelated investigation, initiated in November 2021, revealed the workings of an arms dealer selling guns on the streets of the Bronx, later identified as defendant Jonathan Harris. NYPD detectives were able to link Harris to the Sanfords, demonstrating a larger illegal gun operation spanning the two boroughs. As part of the conspiracy, DA Katz said, the Sanfords were allegedly observed by law enforcement officials as having communicated with defendant Harris on a regular basis in regard to smuggled weapons available for sale.

In January 2022, the Court authorized electronic surveillance of defendants Anthony Sanford, Oliver Sandford, and Harris, which showed numerous trips taken by Harris to the Knoxville, Tennessee area, especially during gun shows taking place in the area. Additional surveillance was authorized by the Court in March 2022 that uncovered defendant Harris allegedly traveling to the Knoxville area, specifically for the purpose of meeting with a gun supplier, later identified as defendant Richard Horne, a Tennessee resident. Subsequent intercepted calls between Harris and Horne revealed overt discussions of makes, models, and prices of the firearms Harris would allegedly purchase.

Furthermore, DA Katz said, laws regulating the sale and possession of firearms in Tennessee are much more lenient than New York and other states, deferring to federal law when regulating firearms dealers and private vendors. Federal law prohibits persons from engaging in the business of dealing in firearms without a license and requires that sellers run a National Crime Information Center background check on purchasers. According to the charges, defendant Horne intentionally failed to abide by such regulations under the guise of a “private vendor,” while dealing in a large quantity of firearms he knew would be smuggled to New York. On April 23, 2022, Horne was recorded warning Harris about federal agents from the Bureau of Alcohol, Tobacco, Firearms, and Explosives (ATF) monitoring a gun show during which they were planning to meet.

Continuing, DA Katz said, upon completing the transactions in Tennessee, defendant Harris allegedly would contact defendant Oliver and his other customer, defendant Thomas Parsley, to arrange the delivery of the guns to both men in Queens and the Bronx. According to the charges, using investigative tools, NYPD detectives carried out a vehicle stop on defendant Parsley in Queens following a scheduled pick-up from Harris in the Bronx on March 31, 2022. The vehicle stop resulted in the recovery of two shopping bags each containing four loaded pistols in individual gun cases. Officers subsequently conducted an arrest of defendant Harris upon his return home from Tennessee on April 30, 2022. The arrest resulted in the recovery of 23 firearms from a plastic tote storage in the trunk of the defendant’s vehicle as well as another six guns from two bags also located in the trunk.

On July 20, 2022, law enforcement officials arrested defendant Horne with assistance from the ATF Field Office and the United States Attorney for the District of Tennessee.

DA Katz said, throughout the duration of the entire investigation, the defendants allegedly sold the undercover officers and were otherwise found in possession of 182 firearms, 136 high-capacity magazines, and hundreds of rounds of ammunition. (See Addendum #2 of PDF for further details on the recovered firearms)

The investigation was conducted by New York City Police Department Detective Ruben Cespedes, with the assistance of Detective Alejandro Valderrama, under the supervision of Sergeants Eric Francis and Daniel Nicoletti, Lieutenant Ruben Pagan, Captain Jeffrey Heilig, and Inspector Brian Gill, the commanding officer of the Firearms Suppression Section and under Assistant Chief Christopher McCormack, of the Criminal Task Force Division of the NYPD’s Detective Bureau which is run by Chief of Detectives James W. Essig.