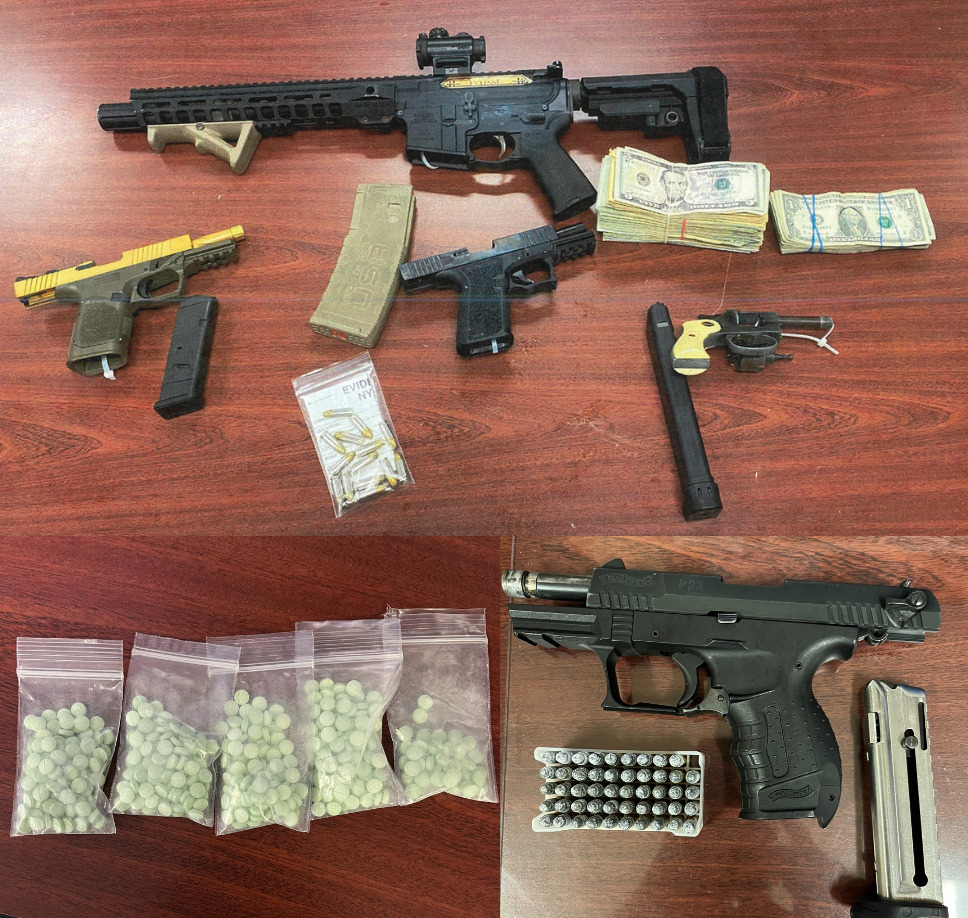 Queens District Attorney Melinda Katz, joined by New York City Police Commissioner Keechant L. Sewell, announced today that Justin Echeverry, 19, has been indicted by a Queens County grand jury and arraigned in Supreme Court on charges of criminal sale of a controlled substance, criminal possession of a weapon, and other crimes. The defendant is accused of operating as a drug dealer and supplying a large amount of narcotics as well as a loaded firearm to an undercover officer between January and June 2022. A subsequent Court-authorized search of the defendant’s home resulted in the recovery of four illegal firearms, including an assault weapon.

District Attorney Katz said, “As alleged, this defendant flooded our streets with deadly fentanyl by selling the pills as prescription narcotics, at a time when Queens County continues to struggle with an alarming increase in fatal overdoses. The defendant also stands accused of possessing an arsenal of illegal guns, having sold one loaded firearm to a buyer without proper permits or security requirements. My Office will not stand for those who sell poison and weapons of death in our communities. Following an investigation conducted by my Major Economic Crimes Bureau and the New York City Police Department, the defendant is now in custody and will be held to account for his criminal actions.”

Police Commissioner Sewell said, “The NYPD will never relent in its public-safety mission of eradicating illegal guns and Opioids laced with deadly fentanyl – all of which have cut a destructive path across New York City and our entire country. This intelligence-driven investigation, carried out with our partners in the Queens District Attorney’s office, reflects our unwavering vigilance in protecting the people we serve – no matter the threat – and I commend everyone who took part in building the successful prosecution being announced today.”

Utilizing surveillance and undercover buys, the District Attorney’s Major Economic Crimes Bureau along with the NYPD’s Queens Violent Crime Squad conducted a lengthy investigation leading to the arrest of the defendant, as well as the seizure of four illegal firearms found in his place of residence.

District Attorney Katz said the investigation began by looking into the activities of the defendant as an alleged drug supplier operating out of Queens County. An undercover detective posing as a “buyer” initially met with Echeverry on January 11, 2022, at which time the defendant allegedly sold five Percocet pills to the “buyer.”

According to the charges, a total of eleven transactions took place between January 11 and June 6, 2022, during which Echeverry sold 99 Percocet and 1,010 Oxycodone pills in cash transactions. During the 11th and final purchase, the defendant sold a loaded .22 caliber Smith and Wesson firearm to the “buyer.”

Upon laboratory testing of the seized narcotics, law enforcement officials discovered that each pill contained fentanyl.

On August 31, 2022, police officers executed a Court-authorized search warrant for the home of the defendant in Flushing, recovering two 9 mm semi-automatic ghost guns, a .22 caliber revolver, a PA-15 assault weapon, $12,260 in U.S. currency, and an array of ammunition.

The joint investigation was conducted by Detective Brett Schantz, and members of the Queens Violent Crime Squad, under the supervision of Captain Kenneth Braumman and Captain Thomas Kelly, and under the overall supervision of Chief of Detectives James W. Essig.

DEFENDANT PLEADS GUILTY IN VISA SCAM; OVER $90,000 IN RESTITUTION SECURED FOR VICTIMS