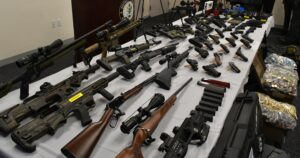 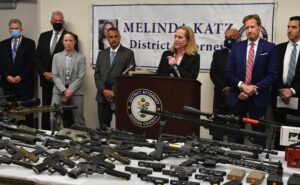 Queens District Attorney Melinda Katz, joined by NYPD Chief of Intelligence Thomas Galati, announced today that Jonathan Santos, 36, has been charged with multiple counts of criminal possession of a weapon, criminal sale of a firearm and numerous other charges for allegedly having a stockpile of illegal weapons, including “ghost” guns, magazines and ammo, in his home and car. This is the fourth gun bust within the last several months that has included the seizure of dozens of completed ghost guns, the components to complete dozens more, accessories that turn pistols into automatic weapons and more than 32,000 rounds of ammunition.

District Attorney Katz said, “Using traditional investigative techniques, coupled with accurate intelligence gathering and analysis, my Office is working in partnership with NYPD to take these tools of death off our streets and hold accountable those who seek to profit by selling them. I call it the ‘Polymer Pipeline’ because a crucial component of these ghost guns is made of a durable polymer plastic. We have a clear message to those who think they can get away with bringing these gun parts into our borough: Think again. We will find you, we will prosecute you and we will dismantle the Polymer Pipeline.”

Police Commissioner Dermot Shea said, “We call them Ghost Guns because they are assembled piecemeal, have no serial numbers and are untraceable to investigators. But the destruction wrought by criminals who wield them is anything but invisible and the NYPD and its partners are working around the clock to eradicate them – whether by regulating them, cutting off their supply over a virtual Iron Pipeline, or seizing them in the streets before they can impact one more life, one more community.”

Investigators were conducting on-going surveillance of the defendant who has allegedly been buying firearm parts online. On Monday, October 18th, police observed Santos allegedly putting long-gun cases into the trunk of his white Chrysler 300 and pulled him over after he drove away from his home.

Firearms and other material allegedly recovered from the defendant’s car include:

According to the charges, defendant Santos was taken into custody and Queens Criminal Court Judge Eugene Guarino signed a search warrant for the defendant’s home. At approximately 9:30 p.m., police executed the Court-authorized warrant and allegedly recovered a stockpile of weapons from the defendant’s 102nd Street home, including:

DA Katz said defendant Santos does not have a license to possess or own firearms in New York City.

Since August, there have been a total of four ghost gun takedowns – two in Richmond Hill, one in Hollis and one in Rosedale – with the following results:

The District Attorney would like to extend her thanks to Joseph P. McGrann, Acting Police Chief of the Metropolitan Transportation Authority Police Department.

The investigation was conducted by Detectives Jason Robles and Breanna Knight of the DA’s Detective Bureau, with the assistance of Lieutenant Alan Schwartz, under the supervision of Assistant Chief Daniel O’Brien and under the overall supervision of Chief Edwin Murphy. Also taking part in the investigation was Assistant District Attorney Shanon LaCorte, Director of the District Attorney’s Crime Strategies and Intelligence Unit.

NYPD OFFICER INDICTED AND CHARGED WITH TAMPERING WITH EVIDENCE