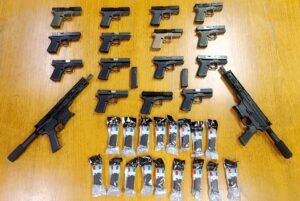 Pictured are some of the ghost gun components recovered as a result of the Queens District Attorney’s Investigation.

Queens District Attorney Melinda Katz announced today that Wenli Bai, 57, has been charged with 129 counts of criminal possession of a weapon and hundreds of additional counts for other crimes after a long-term investigation conducted by the District Attorney’s Office. Recovered were enough parts to build 74 ghost guns, 129 high-capacity magazines and additional ghost gun components.

District Attorney Katz said, “This is the largest seizure of illegal ghost gun kits in New York State to date. In addition to ‘the iron pipeline,’ we’re now seeing a polymer pipeline of illegal, untraceable ghost guns and ghost gun parts from down south. These deadly weapons must be kept off our streets and my Office will continue to work diligently to dismantle this new polymer pipeline.”

Attorney General of New York Letitia James said, “As gun violence continues to plague our communities, eliminating ghost guns has become more important than ever. This massive takedown is critical to our efforts to stop the trafficking of these untraceable and unregulated weapons into New York. Nothing is more essential than protecting our communities from harm, and I thank District Attorney Katz for her important work to keep New Yorkers safe.”

Bai, of Kearney Court in Frederick, Maryland, was arraigned last night before Queens Criminal Court Judge Danielle Hartman on a 336-count complaint charging him with 129 counts of criminal possession of a weapon in the third degree, 129 counts of make/transport/dispose/deface weapons and dangerous instruments and 78 counts of prohibition on unfinished frames or receivers. Judge Hartman ordered the defendant to return to Court on March 11, 2022.  If convicted, Bai faces up to seven years in prison.

District Attorney Katz said that, according to the charges, on several occasions between February 12, 2022, and March 8, 2022, the defendant communicated with a gun “buyer” – who was actually an undercover investigator from the Queens District Attorney’s Office – to transport firearms parts from Maryland into Queens County. On February 15th, a deal was struck with the “buyer” to bring 15 Glock-style, polymer-80 ghost gun kits and to meet behind a business near Sunrise Highway and South Conduit Avenue.

According to the charges, on February 20th, the defendant allegedly sent a text message to the undercover investigator that said in sum and substance: if you want more of the kits, let me know. Another buy was scheduled for March 8, 2022, at the same location in Jamaica, Queens. During this meet, Bai allegedly sold the undercover 30 completed Model-19 polymer “ghost gun” build kits, six complete assault pistol build kits and 30 large capacity ammunition feeding devices.

Following the exchange, police executed a Court-authorized search warrant and allegedly recovered from the defendant’s vehicle more than 100 additional items including:

District Attorney Katz noted that state legislation to crack down on the sale of ghost guns and ghost gun parts will take effect next month.

“The new law increases criminal penalties and will allow us to charge the sale of unfinished frames and lower receivers as a felony,” she said. “We thank the Governor and the State Legislature for their diligent efforts to address the scourge of ghost guns in New York.”

The investigation was conducted by Detective William Abatangelo of the Queens District Attorney’s Detective Bureau under the supervision of Lieutenant Alan Schwartz and Sergeant Joseph Falgiano and under the overall supervision of Assistant Chief of Detectives Daniel O’Brien.