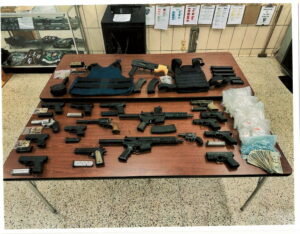 Queens District Attorney Melinda Katz announced that Kevin Sygney was charged today with criminal possession of weapons and controlled substances after a search warrant executed at his St. Albans home uncovered an arsenal of firearms and ammunition, as well as more than eight ounces of cocaine and 625 tablets of methylenedioxymethamphetamine, or “molly.”

District Attorney Katz said: “We will not relent in the war against illegal guns. We will continue fighting this plague, on the streets and in the courts, with everything we have.”

According to the charges, at approximately 7:15 p.m., on January 17, police executed a court-authorized search warrant on Sygney’s place of residence. Inside, they found Sygney and recovered $1,746.25 from him. Inside the residence police also found:

Also recovered was a backpack containing the following: