District Attorney Katz said, “Honoring Black History is an important statement every year. We have to celebrate and pay tribute to the often-overlooked contributions of African Americans in our own borough of Queens and across the nation. This program has been a great opportunity for reflection and celebration with our honorees and featured guests.”

Reverend Al Sharpton, founder of the National Action Network, made a keynote speech and discussed the importance of commemorating Black History throughout the nation. Rev. Sharpton also urged the audience to support black elected officials and become individually engaged themselves.

“The best way to celebrate Black history is to continue to make some and to use what we have in our hands and use what we have available to us,” Rev. Sharpton said. “Every generation before us found a way to give the next generation a better life. I am determined that my children and grandchildren will live a better life than me. Because at the end of the day, you will not be judged by what you said … you will be judged by what you did. So your commitment tonight ought to be that I will make some Black history.”

The District Attorney also recognized Mr. Carl Clay, founder and owner of the Black Spectrum Theater, on the auspicious occasion of the Theater’s 50th Anniversary. Since 1970, The Black Spectrum Theater has grown into a multifaceted performing arts and media company in Southeast Queens that has produced and presented over 150 plays, 30 films, and numerous works of music, dance, and performance art.

The evening also included dynamic performances by the Devore Dance Company, soloists June Rodgers and Jared Davidson, and a powerhouse number from the Queens Alliance Drumline. The evening’s festivities began with an invocation by Dr. Philip Craig of the Springfield Community Church and ended with a benediction by Dr. Maria L. Hubbard of Agape Bethel Community Development Corporation. 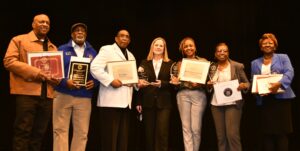 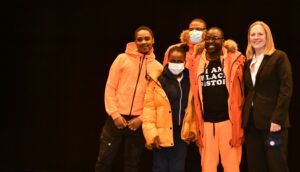 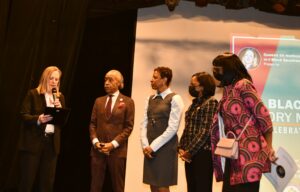 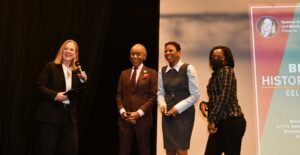