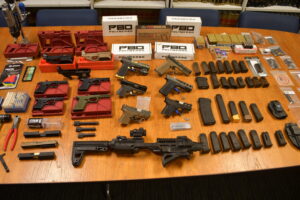 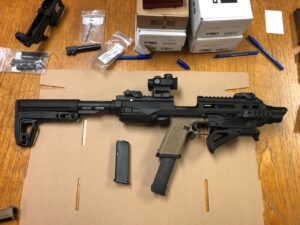 Queens District Attorney Melinda Katz announced today that Lissette Espinal and Ricardi Kiem, both of Rosedale, Queens, have been charged with criminal possession of a weapon, criminal sale of a weapon and numerous other charges for allegedly having a stockpile of illegal weapons in their home. Defendant Kiem was allegedly assembling the untraceable “ghost” guns in their basement apartment shared with their child.

District Attorney Katz said, “Ghost guns are essentially homemade weapons that can be assembled by anyone without background checks or any other oversight. Those who seek to enrich themselves by selling these deadly firearms are literally lining their pockets with blood money. Take this warning seriously: we will continue to relentlessly go after back street gun dealers to keep our neighborhoods safe.”

Espinal, 32, and Kiem, 31, both of Hook Creek Boulevard in the Rosedale section of Queens, were arraigned this morning before Queens Criminal Court Judge Eugene Guarino. The defendants are charged in a 39-count criminal complaint charging them with criminal possession of a weapon in the second and third degree, criminal sale of a firearm in the third degree, attempted criminal possession of a weapon in the third degree, endangering the welfare of a child, make/transport/dispose/deface weapons and dangerous instruments, firearms; unlawful possession of pistol or revolver ammunition and prohibition on unfinished frames and receivers. Judge Guarino ordered the defendants to return to Court on November 3, 2021. Espinal and Kiem face up to 20 years in prison if convicted.

As alleged, police were conducting an on-going investigation and requested a search warrant on October 12th for the home of defendant Kiem. Yesterday law enforcement executed the Court-authorized warrant on the Hook Creek home where both defendants were present, along with their 10-year-old daughter. Tools and contraband were also allegedly recovered from the defendants’ bedroom and there were also firearms and components of firearms found in the dresser drawer of the 10-year-old child’s bedroom.

According to the charges, police seized the following items from the basement level residence:

DA Katz said assembly and storage of the firearms were allegedly in plain view of the child in the home they all shared. The City’s License and Permit database showed that defendant Kiem does not have a license to possess or own firearms in New York City and he is also not licensed to carry a firearm.